Central Florida has some of the nicest weather in the country. To get the most from your trip to Discovery Cove, it helps to know a little bit about what you can expect weather-wise in Orlando throughout the year.

December, January, and February
Orlando's idea of winter is an average daytime high in the low 70's with evenings around 50 degrees. Rainfall and humidity are moderate. Not bad!

March, April, and May
March highs stay in the upper 70's while April and May highs settle comfortably into the mid-80's. Evening temps climb gently from the mid 50's to the mid 60's over these three months.

June, July, and August
Orlando summers are the perfect time for water fun. Average daytime temps are in the low 90's with evenings in the low 70's. Expect pop-up showers in the afternoons, but don't worry these cloudbursts seem to go as quickly as they come.

September, October, and November
Fall in Orlando feels a lot like summer in Orlando. That is, everyday outdoor fun with daytime highs in the mid-80's and nighttime lows dipping into the 60's. 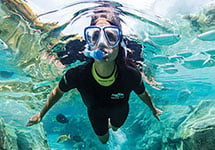 Plan your fun in the sun

Book Now
Are you sure you want to delete this item?